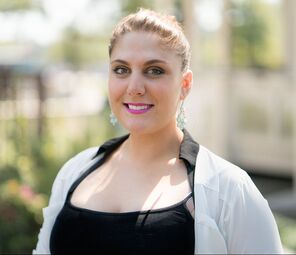 Sophie is a biologist, passionate about human, environmental, and animal rights. She was raised fighting for social and environmental equity through the multicultural lens of her Jewish-American mother and Kurdish-Israeli immigrant father.

​Originally from the Bronx, New York, she fell in love with New Orleans while studying Environmental Science, International Development, and Philosophy at Tulane University. There, she conducted her own study on cannibalism and behavior of blue crabs, as well as co-leading the effort to make Tulane a Fair Trade Certified campus. Sophie was elected to the board of the community service fraternity, Alpha Phi Omega, as Fundraiser and Project Director. Her date auctions, BBQ's, and puppy play date's benefitted Animal Rescue New Orleans (ARNO) where she continues to be a devoted volunteer and avid cheerleader.

An advocate for cultural diversity and education, she volunteered in Costa Rica and worked hands on with the citizens of Ecuador on the Texaco-Chevron Oil Case. She has experience in herpetology for the Bureau of Land Management, American Conservation Experience, as well as the Smithsonian. After the environment, she has a fervent love for tennis and worked as an Instructor at the USTA and ballgirl at the U.S. Open.

A few initiatives she has worked on while at AAE include the NOLA Renewable Portfolio Standard (RPS), The Green New Deal, Gulf South for a Green New Deal, USCAN's Vision for Equitable Climate Action (VECA), and an air monitoring initiative along Death Alley (formerly Cancer Alley). Most rewarding, though, has been her work with AAE's interns and community members.


From Sophie-
"A value and philosophy I strive to live by is intentionality- deliberate, purposeful action that represents what one stands for. The intention behind every action should consider all benefits and consequences, both of who is impacted and who is forgotten. My intent with every action is to increase education and organizing against systemic racism, and decrease my impact on the Earth. I bring this intentionality to tasks as small as repurposing empty cereal bags to trash bags, to creating a Trash Rescue program that diverts thousands of high quality items from landfills to local shelters and community organizations, as well as training others in disruptive humanitarianism/ Non-Violent Direct Action (NVDA) and anti-racism with Arm in Arm.


Ultimately, our waste as well as the consequences of climate change disproportionately impact those with the fewest resources. Intentionality enables me to improve my impact on society through thoughtful consideration of each actions broader impacts."